Enological Adventures in the Garage 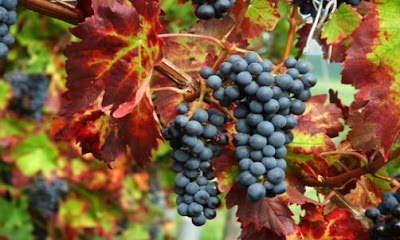 It is hard to pick a favorite of all the great aspects of living and working in the Northwest....but this particular possibility is fighting for a top spot!  This fall we started a new adventure, one that I've been pondering for a couple of seasons now - home winemaking!  Although the Yakima Valley has long been known as the Orchard of America (I don't think that's an official title, but it should be), and the Hopyard of the US (again, making this up....but we do produce most of the hops grown in the US) the region has also been producing some great wines over the last 30 years or so.  Vineyards cover much of the hillsides of the lower valley and I have been contemplating jumping into winemaking for some time.  In preparation of the adventure, I enrolled in an evening class at the local community college last year, The Essentials of Winemaking, and got familiar with the particulars of producing wine, focusing on reds in particular.  It was also a great opportunity to get to know some of the folks in the industry - this investment of time would pay dividends later! 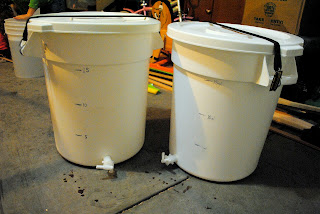 This was to be the year for our first foray into winemaking and I contacted a local vineyard and winery to see about buying some grapes at picking time.  The cold spring we had this year delayed the ripening of every fruit produced in the region.  The grapes I was hoping for, local Cabernet Sauvignon, would normally have come off the vine in late September, but they needed more time to develop their sugars.  Harvest kept getting pushed back one week, then another, then another.....finally the e-mail notice arrived, on the 25th of October - it was go time! 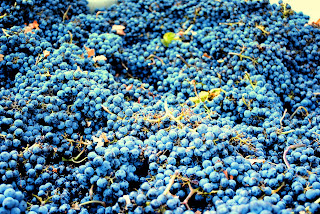 Piper and I headed out to the spot in a borrowed truck with two 20 gallon food-grade containers that I had picked up earlier this fall, outfitted with drain spigots, marked for volume gradations and sanitized.  The grapes were in large bins, picked early in the morning and then collected at the winery.  I loaded 200lbs into a separate container and then those were loaded into the crusher/destemmer (this was a very nice added bonus, to have the grapes crushed).  The crushed grapes were pumped into our containers right in the back of the truck.  We strapped them down and went to pay for them - the vineyard owner and I had been chatting through the process and he waved me off as I reached for my wallet.  "They're on me, enjoy!"  Pretty amazing....we expressed our gratitude and I promised to bring some homebrewed beer in the future (one topic of our conversations) for his warehouse crew.

Winemaking is more complex than brewing beer, but it is also more forgiving in many respects.  Wine can be adjusted at multiple stages, right up until in goes into the bottle - the chemistry is a bit more complicated than I generally have to deal with when making beer, and one is presented from the start with a dizzying array of options for additives that can enhance the process and outcome for small-batch wine.  I leaned heavily on the fantastic information available from www.morewinemaking.com as well as everything I had picked up in my class last year.  It has all helped lend some confidence as we've launched into the experience in earnest. 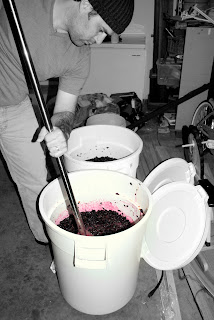 The must was treated with SO2 to wipe the microbiological slate clean, then yeast was pitched about 24 hours after we got it home.  Also added was an enzyme to assist in the maceration process, the extraction of color and tannins from the skins.  Other additives included a fermentation tannin, an inactive yeast product meant to increase body and mouthfeel, and yeast nutrients to aid in fermentation.  Test were run on the pH, total acidity, and sugar levels of the must - the numbers came back solidly in the ballpark for proper fermentation....I'm learning a bunch of chemistry that I probably should have learned in high school if I'd paid more attention. 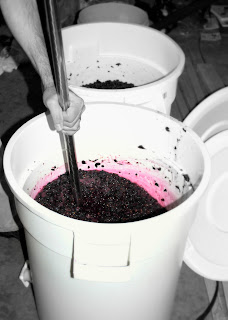 The wine is fermenting nicely already and the "cap" has already formed - this is the layer of skins and pulp that is pushed to the top of the fermenting vessel because of CO2 produced during fermentation.  That cap has to be punched down twice a day and the must stirred up vigorously to help in the extraction of color and body.  I also take measurements on the fermentation with a hydrometer each time I punch the cap in order to track the progress towards the finish.  Once it has fermented "dry" (meaning all the residual sugars have been converted), we will move to the press phase.  Very exciting!