Putting the Kids to Bed 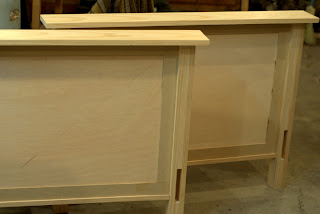 It has been some many months since I last posted, and I have no apologies to give, it has just been a busy time.  There have been several projects that have progressed since October, some new ones, some that have been completed.  This post is about one of those latter categories. 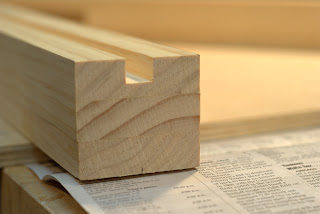 As the kids have grown bigger, we have been experimenting with different sleeping configurations to get the whole family to sleep.  The girls expressed interest in bunk beds, so we got this bunk frame and got it all outfitted and then found that nobody wanted to sleep on the top bunk.  Workarounds were tried, but it became clear that a new arrangement was needed.  So, off to the workshop....

The goal was to produce two identical twin beds that would come in at reasonable cost.  The girls also needed input so they would have some ownership.  Here's what came out:

I built the beds out of pine and worked off of a model I created on Google's SketchUp program, which gave me a chance to think through the design.  I laminated the legs to include through mortises which would receive the sideboards.  The headboards were the most complex, though pretty straightforward as well. 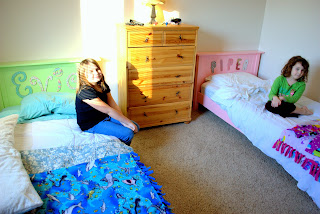 The girls picked out their colors of choice.  "Sparkling Lime" and "Strawberry Shortcake".  After the beds were finished, we created some letters out of 1/4" mdf (Evie did some of the scroll-saw work).  Shannon decorated them in color schemes consistent with each bed, and we affixed the letters to the headboards for a finishing touch.  Voila!  The girls love them, which is really all that matters in the end.  A pretty reasonable project with a fine result.