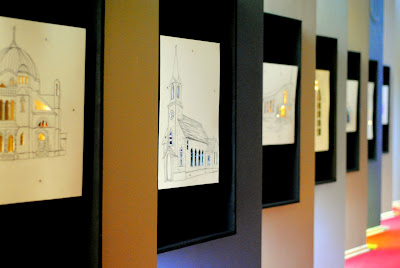 I've recently begun a new preaching series at the church, a study of the Book of Revelation.  It's a difficult portion of scripture to teach through, for a lot of reasons, but it is also a book that invites reflection through the use of art.  John's letter to seven churches in Asia Minor is full of wild imagery and so it seemed appropriate to use a variety of mediums, apart from spoken word alone, to engage the material and the congregation.  I meet with a group of creative-subversives weekly to reflect and plan on the content and direction of the worship services at WestPres and this group conceived of the first project for the series, an installation I've taken to calling "Seven Churches." 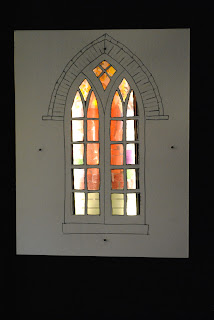 I built seven large boxes, about 3'x4', which one of our team wrapped in black fabric, creating a shadow-box sort of effect.  These were hung on seven panels on the west side of the sanctuary, and will serve as our kind of gallery space for different reflection pieces during the course of the year.  Into these boxes we put seven churches.  These were created by taking line drawings of various churches (a lot of internet searching), reproducing those drawings on black-core photo matte material, cut to size.  People have said, "Wow!  Did you draw those?!?"  Um...well, yes....but.  After projecting the images onto the matte, tracing it out roughly, then using a sharpie to reproduce the drawing to the best of my limited ability.  They are not free-hand inspirations.

Those drawings were placed over smaller boxes, which I built to fit inside our large shadow boxes.  Each church was assigned a word, something that summed up something of the character of each of the seven churches that John wrote to in his letter.  Words like "faithful" and "corrupt", "persecuted" and "dead".  Each box was handed out to a contributing member of the team, they were tasked with creating an "interior" reality of their assigned church that reflected the word they were given.  We figured out a variety of ways to add lighting to the inside spaces, and cut out the windows in all of the drawings so that, if someone approaches the drawing, one can see inside the church, past the exterior.

The effect is pretty good - the churches are all "pretty", to choose one word, especially from afar.  They are nice to look at.  One has to get close to see that there is something going on "inside" the church, and one has to get really close to see exactly what that is.  The idea is that all churches....all individuals, for that matter....have an interior life beyond the facade that we project.  We are hard to know.  But we are known, by One who sees into all our intentions and thoughts, and John's challenge to the churches is to have the interior life and the exterior life both reflect the Way of the risen Christ. 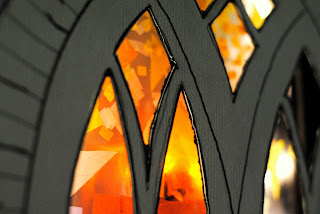 These will remain up for the next two months or so, then we will use the "gallery" space for new works.  It is fun to work in this way - and especially fun to solicit the contributions and reflections of others.