Autumn is my favorite season for many reason - pumpkin spice lattes, cool mornings, changing colors, and for the past several years I have happily welcomed the arrival of the upland bird season.  I haven't always been an avid bird hunter, but the last several seasons I have pursued it with relish.  I had grown up hunting...well, to correct that a bit....I grew up walking along on hunts in Idaho as a kid.  We would tromp wearily through the fields, following after men and dogs, often asked to carry dead birds as part of our contribution to the effort.  I spent the school year, as I grew older, in Seattle with the city-side of the family, so bird season faded into memory.

Several years ago I was serving a church in the high desert mountains of Arizona and was re-introduced to bird hunting.  A friend in the church was pretty crazy for quail hunting in the badlands of Arizona, and he gave me a gun on loan for two seasons as I learned to chase Gambel's quail around the sage, cactus, and mesquite of the Prescott area.  For a variety of reasons, I found bird hunting to be the near-perfect way to soak in the local terrain and find rewarding respite from the various stresses of the job I had there.  I became one of the crazies chasing quail through the desert; in fact, I got pretty good at it. 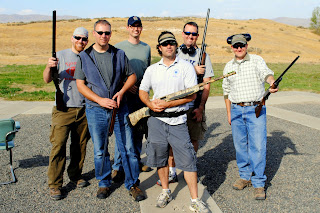 Moving to the Yakima area was a dream come true for an upland bird hunter.  We have quail, chukar, and pheasant all available nearby and the weather in the fall is as close to perfect as one could ask for.  As the season drew closer this year, I decided to share the joy and arranged for a group of local pastors that I know to go clay shooting.  Most of the guys were very new to shooting, so I had to wrangle up a menagerie of borrowed weaponry, shotguns of all shapes and sizes.  I loaded up on ammo, taking advantage of a sale at a local sporting goods store - my cart looked like I was stocking up for a Zombie Apocalypse.  We took some time getting oriented, then ran the guys through several rounds of targets, enough to send them home with bruised shoulders and smelling of gunpowder.  A perfect day!

Dove season opens in September, but it is really just a warmup for the real deal: Opening Day!  This year, the state opened for quail and chukar on Saturday, October 1.  This is my third season here in Yakima and Opening Day has developed into something of a tradition, with a group of 4-5 hunters gathering to hunt quail at the  orchards of one of my congregants.  It is a social hunt, not too serious, but we always see plenty of birds and get a chance to shake the rust off.

This year we saw a ton of birds, and even brought a few to hand.  The dog (Simon) gave some good points, the quail were holding pretty well, an early-season trait that will wear off quite soon as they get more savvy to the hunting routine.  I hung back on some occasions, so I could get some pictures of the crew in action, but I did manage to bring home a half-dozen, and even managed a double on my first day out.  Not too shabby!  The Yakama Nation will open in two weeks, and with that comes access to some of my favorite spots as well as that king of upland hunting: the ringneck pheasant.  But, more than almost anything else, it is the long walks in the beautiful northwest setting that I like the most.  Another hunting season is here - and I couldn't be happier! 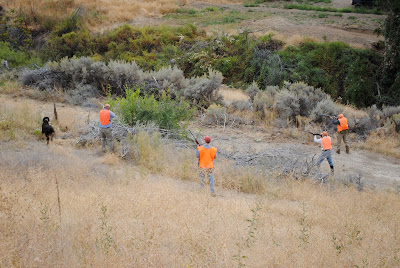