It's the Year of the Leap, and I am taking time to blog about the strange experiences of a big life change.

This past week was my first as an unemployed.....er....self-employed person.  On Monday I cleaned out my office and walked out into a brave new world.  Oh, the freedom that awaited outside those doors, oh the liberty!  I imagined the first days would be filled with leisurely reflection, a slow and careful assessment of the path ahead.

There is an interesting psychological backlash to becoming suddenly vocationally unattached - rather than creating a sense of freedom, instead I experienced an immediate and overwhelming urge to get some stuff going, to get irons in the fire, to get things FIGURED OUT!  Probably not a mystery, my "provider" identity was suddenly in real crisis and the compulsive business that resulted was a predictable reaction to fears of destitution.

And so I launched into a maelstrom of productivity, a near fit of projects, chores and new initiatives.  My to-do list has been enormous and unfocused, my days so full that I felt a gnawing frustration that there were not enough hours in the day to address my ambitions.  Though it scratches that little insecure itch that says, "you're not DOING anything," it is otherwise impractical and unsustainable.

There are lots of things that are disorienting about a big change, stuff that is confusing to yourself and to others.  I had occasion to reflect on this while I was doing a chore that comes up around the farm in the springtime - the time for sheep shearing has arrived. 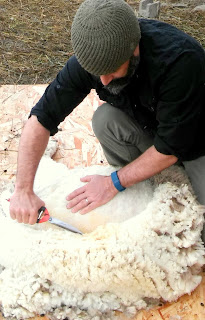 I have been keeping a little flock of sheep for several years now.  You can go into the Wayback Machine and check out some of the genesis story here.  Since those first days we have grown that little flock, which, with the addition of 10 lambs this spring, now numbers 23.  Their wool grows with relentless consistency, and each spring I take up shears and commence trimming.  It is not particularly easy work, but it is satisfying in many ways.  Certainly I am standing in the footsteps of my Scottish ancestors, those muddy, manure laden footsteps - and that is sort of a nice feeling.

The sheep are corralled and picked out, one by one, to suffer the indignity of a haircut.  With each blow (thats what they call a cut of the shears, in sheep-handling parlance), their heavy coats are cut back, revealing a creature that is by many degrees cleaner and smaller than they appeared before.  Their wool, if white, glows anew, and if they were caramel colored before, their wool bleached by a season's sun, they are returned to the pure black of their younger days.  It is a pretty remarkable transformation. 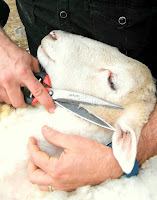 Now, sheep suffer from a poor reputation in the smarts department and though they are winning creatures in many other ways, that particular slight is at times well-deserved.  One annual demonstration of their dimness inevitably arises at shearing time.  A freshly-shorn sheep is unrecognizable to his or her peers - really.  Sheep don't recognize their colleagues after a haircut, to such a degree that, for instance, the rams will set upon one another with all kinds of head butting and other displays of dominance because Odin, our younger ram, believes that old Atlas, freshly shorn, is really a new kid on the block that needs to be put in his place.  But Atlas is still Atlas - the king of the pasture, something Odin will rediscover in short order.

I think we are prone to the same mistake, in our own ways.  Our culture associates so closely the ideas of "who we are" with "what we do" that when someone makes a dramatic change in the latter we are tempted to translate that change to the former.  In my own case, leaving behind a career in church ministry has brought about all kinds of confusion in some folks.  It is as if, having embarked on this change, I have become unrecognizable.  And it's not just them - I think that half of my frenetic doing of all the things this past week is rooted in the same misconception.  Cut loose from what I have been doing for so long, I have been instinctually filling in the gap with lots of other stuff, scavenging a new identity from bits of activity.  A fearful shield to guard against the inevitable question, "So, what do you do?"

As I have been working through this big life change others have reached out to talk about their own life transitions and I realize I am not alone in this.  One of the impediments to embracing a needful change is a sense of identity conflict.  We get wed to a particular path, a career trajectory, and some of the reluctance to changing that is the sense that it somehow it would be inconsistent with who we are.  A friend of mine was struggling with this very problem, wondering if his desire for a change somehow painted all of his past endeavors as mistakes or misjudgments, a grand waste of time.

I don't believe that's the case.  Old John Locke, that english thinker from the 17th century, used to talk about things having a "real essence" and a "nominal essence."  The nominal essence was what we could observe and describe about a thing, but the real essence was what lay underneath, a kind of core.  Maybe I can suggest that we have similar layers to our own identity - of course we are in some way reflected to the outside world in the things that we do, the work we engage in, etc. - but those identifiers are not who we are, our real essence.  Underneath the dirty woolen fleece we are the same person - a big change just gives us a chance to shake off some of the tangled, matted accumulation of life and step out feeling lighter, fresher, newer.

There was a story out of New Zealand that ran around the interwebs a couple of years ago about an old sheep named Shrek.  This cagey fellow managed to avoid the indignity of the shears for six long years, apparently he'd taken to hiding in caves when the shepherds came calling (maybe not so dim after all).  His fleece, left unattended and unchanged, grew....and grew....and grew.  Impressive, but not particularly healthy.  He was finally caught and shorn, yielding a 60lb fleece, stepping out into life a new man...er...um...sheep.  New, but also the same.

Are there lessons here?  How about this one...don't hide in a cave when it's time for a change.  Step into it, welcome it, let the old trappings fall off like sheep's clothing.  The you that is always you (ewe that is always ewe?) will be happier for it.