On Fences, Grass, and Relative Greenness

I feel the need to make a disclaimer:  These won't all be about sheep.  I promise.  But this one is...and the last one was.  So I get that you might be suspicious. 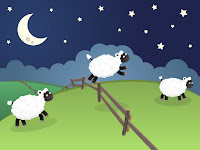 Curb that suspicion, gentle reader, and ask yourself, instead, why it is that sheep still speak in our modern and far less sheepy world!  Think about it.  Whether it is the old idea of counting sheep to help get to sleep or slinging all manner of sheeply metaphors or colloquialisms while living in a mostly urban or suburban existence, these critters just seem to persist in our homo sapien psyche.

When I was in the business (not so very long ago) of doing funerals on a regular basis, I would meet with grieving families to plan a service for their lost loved one.  Many times these were awkward meetings between a pastor and relatives of the deceased who often had little or no relationship to the church.  They came to the church out of some sense of....what?....duty?  Cultural norms?  Where is one supposed to go in such a time?  It turns out, after a long life lived with only vague attachment to any particular community of spiritual conviction, people for some reason felt the need to invoke religious language and ritual at the end of their lives.

I don't say this with judgment, far from it - I was just plain perplexed as to why they didn't create some family observance of their own, why the need to set up this thing in the church they didn't attend with a pastor they didn't know?  Probably this is some kind of residue, a muddled mix of felt needs that arise in the midst of a culture that has a significant number of people who consistently claim some kind of Christian identity, yet rarely, if ever, darken a door of an actual church community.  Well, they darkened my door often enough, in their hour of perceived need, and awkward conversation ensued.

"So," I would ask at some point in our meeting, "did So-and-So (the deceased) have any particular verses of scripture that they were drawn to?" This question was often raised during my fishing expedition with the family, trying to draw some inspiration for the heartfelt and moving message they hoped I would give on behalf of a stranger.

"Oh, yes," they would say, eyes widening as they looked around the table for help, "Yes, yes...old So-in-So just loved that one....um....that one.."  Their eyes scanned the room in desperation, hoping some fragment of religious-sounding speech might leap out at them.

Their faces would light up with relief and recognition.  The Psalms, of course, everyone has heard of those!  "Yeah, the Psalms," they would exclaim, "especially that one!"

"That one?" I would ask, even though I knew the answer already.

"Yeah, that one about the Shepherd!  So-in-So loved that one!" 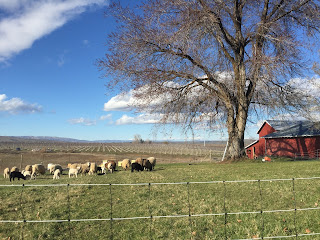 That one about the Shepherd.  They meant Psalm 23, of course, which in the big wide world of the Psalms is the one that folks tend to remember.  There are probably several good reasons for that, but one of them has got to be the fact that the Psalm talks about sheep.  Sort of.

It talks about a shepherd, anyway, and about green pastures and other things that sheep like, so the actual sheep are strongly inferred.  And we like the sheep, we human folk, probably because we have had a long relationship with the woolies, and by long I mean like buried in our DNA sort of long.  So when we read an ancient text, like Psalm 23, and those long-ago, far-off people start dropping sheep references, some part of our brain springs to life and says, "Hey, yeah....somehow, that makes sense."

What is all of this driving at?  It's all about that grass and those fences and relative greenness.  That old wisdom about fences and green grass arises out of a real observed phenomenon with sheep and other grazing livestock.  Placed in a pasture, they seem to think that the grass that is just out of reach is always the best and most desirable grass they can imagine, and they will put themselves in sometimes ridiculous situations trying to get to it.  Their antics wind up as our country wisdom, and the whole fence and grass proverb describes a kind of vain longing for something different, when what you have right  now is more than adequate.  It warns of disappointment if you risk the effort of getting over, under, or around the fences, the boundary lines that prescribe your life and circumstances.  And like most folksy wisdom, it is true.  Sometimes.

There is an alternative yet complementary truth of pastured life, one that is hinted at in that old Hebrew poem.  You might recall that little stanza, "He makes me lie down in green pastures....he leads me beside the still waters...he restores my soul."  There is the necessity of constant movement in sheeply life.  A shepherd does a lot of leading, choosing new, greener pastures on which the sheep can find forage.  They need to do this because they are incredible eaters, walking, breathing lawn mowers and weed trimmers rolled up in a woolen package.  Around this little farm, after a long winter of eating bales of alfalfa and dried orchard grass, they are eager to get after every new shoot of green that has the audacity to spring up out of the ground.  In just a little time, they will eat their pasture down to the ground, and then they need to get moved.

Find yourself longing for something new?  One of the voices in our heads invariably tells us that we are just dreaming vain dreams, that the higher good is to stick it out right where we are.  Certainly as I contemplated this big change in my life (Everything is Changing), I encountered a strong thread of advice, internal and external, that suggested I was just a little tired, and after a rest I would find the stamina to carry on doing just what I was doing.  Not only that, this advice came along with a sort of ethical argument that named the "good" as staying the course, and called change the "bad."  This kind of ethical rationalization is especially prevalent in ministry circles, where "faithfulness" is defined in one way - a lifetime committed to the calling of the clergy.  It is not uncommon to hear the idea that if someone exits the ministry it must have been because they were never really "called" to it in the first place.

But, just like the sheep, we are made for change, for movement.  That longing inside of you might just be telling you that it is time for new pastures or quiet waters.  Those dreams of a different life could be your very soul making a case for restoration.  So, don't let one bit of country wisdom hold you back from pursuing your big change.  That little proverb on fences doesn't tell the whole story.  Remember those sheep that you sometimes count to get to sleep?  Take your cue from the woolies - they are out there in your near-dreamland jumping fences.  Maybe it's time for you to do the same.