For the past several years I have really enjoyed the upland bird season here in the Yakima Valley.  Chasing quail, chukar, and pheasant through the big landscapes of the mountain west is one of my favorite pastimes.  One of things this kind of hunting has in its favor is the relatively low-maintenance nature of it - there is very little stuff one needs to do it.  A gun, some clothes appropriate for hiking, and a vest that can carry shells, maps, water and the like - and the vest should also be orange enough to make you visible to others in the field. 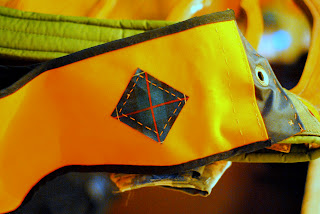 Now, of course, you can go much, much deeper than that into the gentleman-hunter's rabbit hole.  Many thousands of dollars can be spend on nearly any of the above-listed items.  Specialized clothing suppliers wills happily sell you hunting boots for $500 a pair, and "shooting clothing" made by manufacturers like Filson will ready you for the field shoot and the photo shoot....if you have the green to pay for all that orange.  I appreciate the craftsmanship, but I am not possessed of such limitless funds....there must be another way! 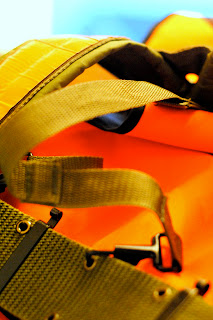 After several seasons of some stop-gap designs (strapping orange to my fishing vest, for example) I had enough experience to settle on some specific needs and wants in whatever would become a more permanent replacement.  I pined over some high-dollar strap-style hunting vests like the ones by Filson, or Browning, but couldn't quite get over the price hurdle.  Tempted many times, I was unable, ultimately, to imagine any version of a conversation about the receipt with my wife that ended well.  Some of those imagined conversations, in fact, ended badly...very badly.

So, armed with some design ideas and a slim budget, I was off to the surplus store.  There I found all manner of old army stuff that, when creatively combined, created the foundation for a vest.  What it lacked was a game bag, a place to keep the birds, and enough orange to make it 'legal' in the field.  A quick stop at the fabric store yielded several small patches of fabric that would do the trick.  Equipped with needle and thread, I got to stitching. 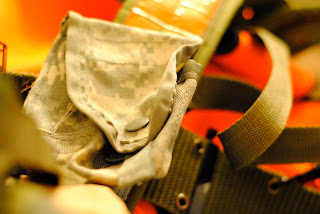 The result is a vest I'm pretty excited about.  It incorporates a lot of small features that I have settled on as useful for some of the particular rigors of chasing chukar up and down the rimrock ridges of central Washington, including a water bottle (although the vest would be compatible with my camelback water system as well), and generous pockets for shells.  I have also added a cell phone pouch, and a document bag, something to hold maps, licenses and the paperwork required for hunting on the land of the Yakima Firing Center (the US Military base located near Yakima....which happens to include great chukar habitat).  The game bag has been made water resistant and, lined with rip-stop nylon, should prove durable as well.

The product, as good as it looks now, remains untested.  October 6 marks opening day for quail and chukar on state lands, so its debut is coming soon.  It may not have the panache of its big-money cousins, but I think this homegrown vest will hold its own.