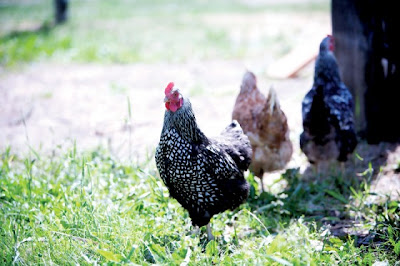 The chicken coop, renovated and populated this past spring, is now settled into high productivity.  We have fourteen hens in the 'big house' and they have all finally come into their own as proper layers.  They had started out as three factions: five chicks raised in our garage, five chicks raised in our friends Keith and Ruth's garage, and four layers given to us by someone who just had too many chickens running around.  Those cliques were impenetrable as the chicks grew up into teenagers, the separate groups would band together, eyeing one another suspiciously - a poultry version of Westside Story.

But these days the old animosities have been left behind.  There is reconciliation in the big house, and the hens get along very well.  We haven't had any incidents of them picking on one another, pulling feathers, or that kind of stuff, though we have heard stories of such things becoming a real problem.  With fourteen layers in there we are now getting up to 1 dozen eggs a day.  Usually it's somewhere around 8-9, but occasionally they get fired up and crank out a full dozen.  They are also spending a great deal of time free-ranging these days.  We often leave the coop door open 24 hours a day, and the girls find their way in and out and all around the farm property.  They especially like the peach orchard across the road, and I've had to fetch them out of there on occasion. 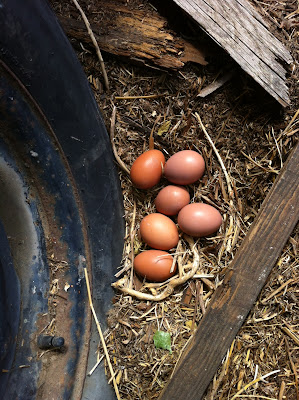 One hazard of such a free and easy lifestyle is that the hens can sometimes get a little sassy about where they are laying their eggs.  The other day I was rounding them up from their daytime haunts around the farm, and while chasing several out from under a boat tarp, came upon Red Ranger, Tavish's favorite hen, who had clearly been holding out on us.  She is a new layer, her eggs still on the smaller side, and she had been depositing her eggs each day in a private spot, and was trying, in all earnestness, to hatch those little things.  This task is beyond her, of course, since the eggs are not fertilized.  We have since dissuaded her from this course and she has mended her ways.

Putting all these eggs to use is a challenge, but egg-rich recipes like brioche and lemon curd help make a notch in our supplies.  We give some away, the girls may start selling them by the dozen, and of course the pigs look forward to a score of hard-boiled treats now and then.

Meanwhile - a new flock is being developed on the other side of the farm!  Eleven birds of mysterious parentage, dropped off at a tender age.  Keith and I repurposed one of the horse stalls into a new walk-in coop, opened a door to the outside world and stopped feeding them after several weeks.  These are our wild birds, who free range because they have to!  We make plenty of water available, provide roosting poles and nesting boxes (which they don't make use of quite yet, still being of a tender age....mmmm....tender chicken).  I catch sight of these feral chickens on occasion as they dart in and out of the weed patches around the property.  They like to patrol the pastures where the larger animals graze, so the pigs and the horse each get their company during the day.  They seem to be doing very well, and this experiment in pastured, free-range poultry looks to be a success.  When they get to laying age, we will restrict their movement some in order to get them established in their laying routines, and then they can pursue their vagabond lifestyle once again.
Posted by Unknown at 7:21 AM