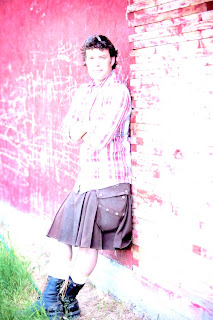 I admit that I've been having a bit of a freakout.  It has taken me some time to come to terms with it, to understand what I've been reacting to, what has been driving a recent spell of rampant introversion.  And I think I have identified the source, as unlikely as it may seem to some of you who know me well, as impossible as it might seem to those who know me a little.

Earlier this summer I was interviewed by a local magazine here in Yakima.  It goes by the appropriate title, Yakima Magazine.  Initially I was talked into a profile piece.  You know, a kind of "who are the people in your neighborhood" kind of thing, an innocuous fluff article on a local pastor tucked between ads for the fair and the classifieds.  A photoshoot was scheduled.  Ok, I can handle that.  A couple of photos in several settings, surely one good one would surface for the article.

Several days before the article was published, the writer called to go over the text with me and I asked if they had found a photo that worked.

Cover model, that's me.  So, you should know that this magazine is a free publication.  It goes out in a Friday addition of the local paper once a month and is also distributed in stacks to local businesses, libraries, etc.  In short, they paper the town with this thing.  You know those periodical dispensers outside your local grocery store...the bins where you can pick up the local paper or the nickel ads or the auto-trader?  Yeah, my cover photo was all over those things.

Of course, it was all in good fun.  The article was fine, the response was very positive and resulted in a strange level of attention.  I found myself a kind of B-list celebrity in town.  People would double-take in the grocery store as I passed, getting up the courage several aisles later to say, "Hey, you're that guy from the magazine, right?"  The folks at the church were very proud and we had some good laughs, I even signed some autographs that first Sunday after the magazine came out.....yeah, don't unpack that too much, I have tried to block it out.

But I have since found myself in something of a funk.  And I think the article has something to do with it.  One of the things people don't often guess about me is that I am an introvert.  I don't always look much like an introvert.  Mmes. Myers and Briggs label me an INTJ.  It is true that my "I" (for Introvert) is borderline....but that line is moving, moving slowly and steadily over the last several decades from the crowded mall food court to a sage-covered hill in the wilderness.  I used to be an ENTJ back in the day....but my "I" side is slowly taking over.  I am a situational extrovert, which means I can become a people-person when necessary, but it does not give me energy.  It, in fact, exhausts me, and I often retreat after public exposure, like preaching, for instance.

So the magazine article ended up being a laser-focused spotlight under which my introverted self shrank and shriveled.  I found myself retreating from facebook, from my blog, from other means of friendship, communication, and networking.  My projects and interested didn't cease, but my desire to share those with anyone else was gone.

Of course, this is an over-reaction.  I am slowly coming out of this period of retreat and gaining some perspective on it.  I think self-sufficiency is an illusion, but my introvert inclinations push me to want to believe in the illusion.  The truth is, much of the projects and passions I pursue are at their best when they introduce me to community.  Community is a basic need for humanity, even for a borderline introvert.  I enjoy the company of others, I especially love sharing the joy of discovery that comes in so many of the areas of interest of mine, whether that joy is shared with my kids, my wife, or the many friends that I meet through this poly-hobbiest lifestyle.  I really do like to bring people together, especially through shared passions - I suppose I have just had the opportunity to see some of my own demons, and might recognize them on the street the next time they are heading my way.

So I am back on the blog.  Lots going on, especially as fall, the most blessed and perfect of the seasons, comes to Yakima.  I'll try to do some catch up here and there with some of the projects that have been going on.
Posted by Unknown at 9:33 PM