When the duldrums of late winter hit, a man is bound to make rash choices.  I think it was back in February that this particular rash choice was made.  Winter was straggling on, spring was nowhere to be seen.  Bird season was over, fishing season had not yet begun.  All this is to say, it is not really my fault.  I was vulnerable when the Facebook ad grabbed my attention.  It promised adventure, it promised challenge, it promised glory....it was targeting middle-aged me, and it found its mark.

"The Warrior Dash", the ad read, "a mud-crawling, fire-jumping, extreme run from hell."  A small ember of excitement sparked to life in my cold February heart.

"This fierce running series is held on the most challenging and rugged terrain across the globe."  It was coming to Washington in July, what luck!!

"Warriors conquer extreme obstacles, push their limits, and celebrate with kick-ass music, beer, and warrior helmets."  You had me at hello.

What every rash decision needs is an affirmation by another rash person.  I called up my twin brother, Alex, and pitched the idea.

"So," as I wrapped up my pitch, "I thought we'd run the thing in utilikilts and blue face paint, sort of Braveheart style."  In another family, these words would rarely, if ever, be uttered in a sentence, but Alex didn't blink.  "I'm in."

Thus began our Warrior Dash adventure which reached its epic conclusion on Saturday, July 16th.  The Warrior Dash is a strange combination of an obstacle course, a 5k run, and the Burning Man.  Almost 10,000 people swarmed the event site on Saturday, a strange menagerie of folks that had turned out to celebrate the Warrior spirit.  Costumes were many and varied, but even the freaks nodded and murmured with admiration when the blue-man group (a nickname I heard a couple of times) passed by.  My wife and the kids trailed behind us at a socially safe distance.

Flights of 500 were sent out onto the course every 30 minutes.  Alex and I found our way to the starting line and were corralled there like cattle with a strange cast of warriors that included Batman and Robin, a large man in a towel and shower cap, three men in business suits, Fred Flinstone, a few luchadores, and even a couple dressed as bride and groom.  We knew that the course had a good 1.25-1.5 mile stretch of running at the start to kind of stretch the line out, so we planned on keeping a brisk pace early so that we wouldn't get bogged down by the less ambitious warriors at the obstacles.  At the sound of the starting horn we darted out, ducking and weaving our way through the crowd, following the lively pace set by three young men in rather tight-fitting lederhosen (sans shirts). 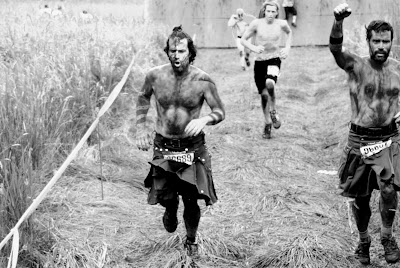 Our plan worked admirably and we took the first obstacle in style, a series of high and low obstacles that we hurdled/rolled through without much problem.  We were off and running, proving our warrior valor. The track took us through grassy farmland and it had been trampled by the feet of warriors all morning, so had become rutted and muddy in places.  Such things are of no consequence to true warriors, of course, who consider a snapped ankle a minor inconvenience.  We pressed on, working our way through several more obstacles: a tall wall with ropes for climb assist; junked cars parked as barriers and surrounded by a field of tires; a precarious balance-beam zig-zagging over the ground; a large net platform to maneuver across; another large wall requiring a slide/jump down the back side; an army-crawl through a darkened structure in the mud; a battery of tires suspended by ropes. 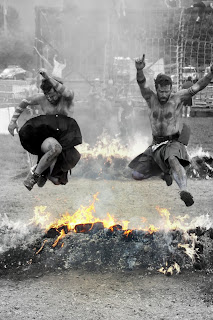 All of these were just a prelude to the main obstacles waiting at the finish line, of course.  It was there that warriors would be truly tested.  After emerging from a 300 yard stretch of muddy hell just before the finish line, we were funneled into the final stretch were the last three obstacles awaited.  First, a large a-frame of cargo netting, covered with a slow-moving mass of carnival freaks.  Second, three berms of fire that tired warriors had to vault over.  Third, and most diabolical:  a mud pit of truly epic proportion and devastating quality. 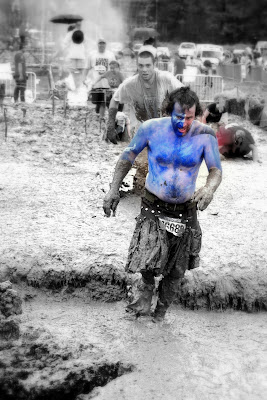 We crossed the finish line exhausted and 30lbs heavier consider the mud caked to our legs, arms, and kilts.

It was a great time, may have to do it again next year.  I'm sure I'll wait until late February to consider it fully. 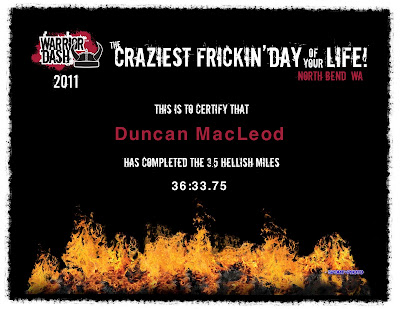