A Flock of Roosters 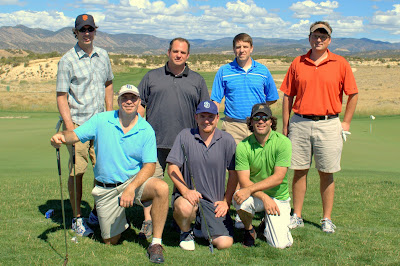 It all started with a simple idea:  How about we get a few guys together for a poker game?  That first poker game, played in 2003 in the basement of one of the married-student housing apartments at Princeton Seminary, led to the creation of a noble institution - the Rooster Coop Poker Society.  Twelve original members signed the Coop Constitution, and began a worthy fraternal and philanthropic fellowship.  During our seminary years, the Coopers held semi-illicit poker games in mildewy basements and empty apartments and managed to raise more than $2000 dollars for charities like the Heifer Project, Tsunami Relief, and Hurricane Katrina relief.

In 2006 our great Diaspora occurred, as Coopmen were sent far and wide to pursue their various ministry callings, in both parish churches and the academy.  We determined to meet once annually to continue our fellowship, to support one another in our personal, professional, and spiritual lives, and to strive against one another for our various perpetual trophies, including Little Jerry and the Green Jacket.  For the last five years we have done just that, gathering from all corners of the nation to some new and exciting location.  This year we gathered at a secret mountain lodge high in the Colorado Rockies, deep in the Sangre de Cristo Range.

Our time together is marked by shared meals, worship, check-in and prayer time, golf, poker, and trips to local attractions.  This year I shared the kitchen duties with Prof. Brennan Breed, fellow foodie and Old Testament Scholar newly hired at Columbia Seminary.  The menu through the week included rack of lamb, bison sliders, stuffed pork roast, taco assortments (carne asada, battered fish, carnitas) and there were even some vegetables!

We played our annual golf game at Four Mile Ranch, near Canon City, CO.  The course was a "target golf" type of course, extremely challenging, and made more exciting by the presence of rattlesnakes.  Fetching an errant drive could have dire consequences.  We did run into one or two of those snakes, but managed to avoid any trips to the emergency room.  It was a beautiful day to play and the only downside was that the Green Jacket wound up on the shoulders of Scott Castleman, who managed to control his game on the back nine and seal his victory.  Congratulations Scott.  Jerk. 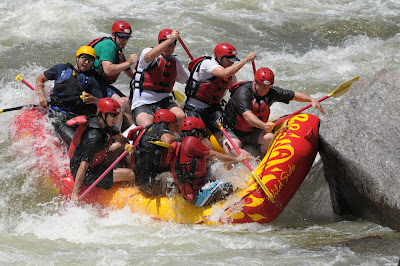 Since we were staying so close to my beloved Arkansas River, we decided to spend our local activity on a raft trip through the Royal Gorge.  I used to guide on this river many moons ago, so it was a particularly sweet visit for me.  We couldn't have asked for better weather, and the water was running at a decent level for the Gorge, 1400cfs.  Our guide was green as they come, we were his third....one, two, third commercial trip on the Gorge.  Our run through Sunshine was illuminating - it was especially alarming that the guide was unaware that we had hit this rock until he saw the pictures after we got back to the lodge.  "Whoa, I didn't know we hit that!"  Yeah....no kidding. 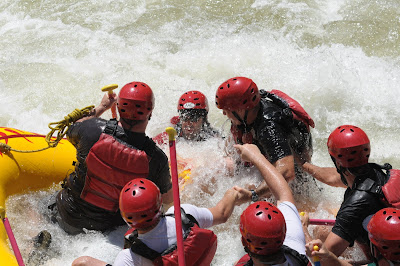 T-boning the rock was just the beginning of our adventure through Sunshine....we did a 270 degree spin off of that and slid sideways into a downstream hole, and I got sucked out as we low-sided in a rather alarming way.  I have swum in the Arkansas many times, never in Sunshine, though, so there's a first for everything.  The picture has a lot going on in it....Castleman is playing hero with Miller, while Breed points out the guy in the water to everyone else.  "That guy!  Right there!  He's right there!"

The jury is out on whether Patrick Vaughn's hand is
attempting to push Miller from the raft.

We made it down the rest of the stretch without too much undue adventure, and the Gorge is still as breathtaking a setting as I remember, the trip takes you directly beneath the Royal Gorge Bridge, where the tourists watch the rafters 1000ft. below.  The next day we drove down to Colorado Springs to drop two of our number at the airport, and then several of us drove to the top of Pike's Peak, where we got stranded for a couple of hours, enduring lightening and hail that kept us trapped in the gift shop.

Luckily they had donuts.

Our time together each year is extremely valuable to me and I am grateful for these guys and their place in my life.  This particular year I was able to spend a few more days in Colorado with a few of the guys, and we decided to take the adventure up a notch.  On Saturday we climbed and summited Mt. Quandary, one of Colorado's 54 14,000 ft. peaks.  The weather was perfect, and on the way up we came across a group of mountain goats.  They posed politely for our photos.
Since it was a weekend day, there were many others climbing to the summit and a sort of party atmosphere prevailed at the top.

But our legs and feet were not enjoying a party, and
we were very glad for a hot-tub at the hotel in Breckenridge.

On Monday, it was down to Castleman and myself.  I had begged a favor out of an old friend, Jeff Hoffmeyer, and he met us way up in the high country on a stretch of a private-access trout stream called the Tarryall.  Scott was just learning to fly-fish and the setting was perfect.

The fish weren't so big here, but they were still fun to fish for and I think Scott may have caught  a bug for this refined sport.  I did manage to pull a rainbow of decent size out of the
Arkansas earlier in the week, which was gratifying.  Our time on Monday was marked by the kind of tranquility one can only enjoy when you are outside of cell coverage....it was good for the soul. 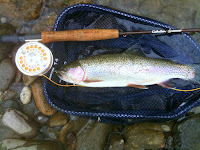 On Tuesday I enjoyed a solo visit to Boulder before catching a flight back home.  It was fun to walk Pearl Street again, to see the University where I had squandered time as a youth.  I shopped for souvenirs for the family and managed to catch up with Hoffmeyer one last time over a pint at the Walnut Brewery. Boulder is a special town and I hope to visit again soon, next time with the family.

In spite of....or probably because of....all of the crazy activities and adventures, I always come home refreshed and renewed, a little more focused for the many tasks and challenges that await.  Thanks, Coopmen, for your continued fellowship and for the chance to spend such a great week with you!