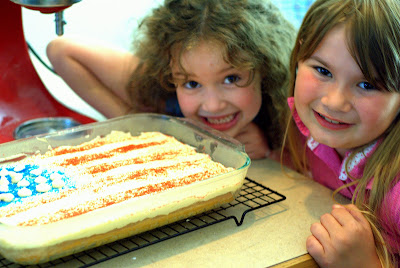 I was ordained into the ministry on July 8th, 2006 - since that time, the Fourth of July has always snuck up on me as a holiday.  When I started as an associate pastor I could pretty much count on preaching on major holiday weekends, what we affectionately called "Associate Pastor Sundays."  These include, but are not limited to, Labor Day weekend, the Sunday after Christmas, New Year's weekend, Thanksgiving weekend, etc.  Being a solo pastor the situation is much the same, except I can now count on preaching all of the other weekends, too.  That's called upward mobility. 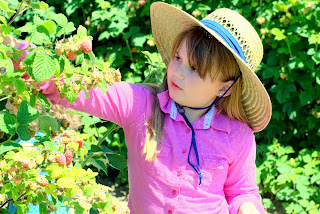 Anyway, the holiday portion of the weekend usually ends up being something of an afterthought.  As the kids get older, it seems a little lame to let a holiday like the Fourth pass quietly, so we got a little more on the ball this year.
The girls, brimming with patriotic spirit, decided that the best way to start the day was to bake a cake and decorate it like the American flag.  Shannon has recently perfected a rather perfect yellow/vanilla cake recipe...and I mean, it's really, really good...so she and Evie got started with baking before the day had really even got going.  In the meantime, I loaded Piper and Tavish in the car for a special trip into the Yakima Nation to look for fireworks!

Fireworks are one of those pleasures from an ill-spent youth that I can't resist.  Something about the smell of sulfur and gun powder activates pleasure centers deep in the limbic center of the brain.  I wasn't about to start them off with the bottle-rocket fights and roman-candle wars of my younger days, but they seemed ready for some entry-level firework fun.  They stepped up to the roadside stand with a healthy curiosity about the colorful packages behind the counter and we left with a couple of non-descript paper bags filled with dangerous and glorious potential.
Fireworks would have to wait until the sun sank a little lower on the horizon, something that would come very late in these Northwestern latitudes.  Shannon had gotten word that a local U-Pick place was opening for raspberries, so we loaded up the kids and headed out to hunt and gather.  The owner of the place recognized Tavish from last year, and offered to weigh him before he headed off to gorge himself on the waiting crop.  Then we could weigh him on the way out and just pay for the difference.  Tavish lived up to his reputation, and as the rest of us picked busily for the next hour, Tavish disappeared amongst the thornless canes, emerging with red-stained hands and face when it was time to go. 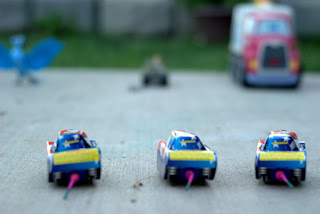 We vacuum-sealed the berries when we got home and put them into the new freezer.  It has been slowly filling up with our harvests from the summer, including salmon, peas, berries, and soon to add blueberries and some other garden gifts.  The afternoon was spent snacking on cake and watching the sun sink lower in the sky.  We had plans to watch the local fireworks display at 10pm, and we thought we'd have our own display before that. 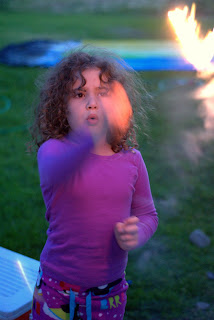 At long last the hour arrived and we started making fire in the backyard!  We started with colorful smoke bombs, then moved on to a package of snakes, which Evie observed looked a little like poop.  Recovering from that, we lined up three tanks in an epic battle with a plastic bluebird, a GI Joe truck, and an ice-cream truck.  There was a lot of light and sound, few casualties.  Sparklers were fun, and provided for a couple of great pictures.  We ended the evening driving out to the east side of town and parking the car near the fairgrounds.  We heaved the kids up through the sun-roof on the minivan and they sat on blankets on the top of the car watching the display.  They were all asleep by the time we got home.  A pretty good holiday...
Posted by Unknown at 8:43 PM