It's Good to Be King 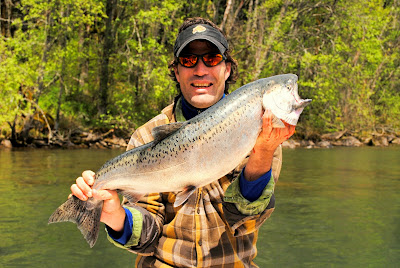 May brings about one of my new favorite pastimes - fishing for spring Chinook salmon, also known as King Salmon!  These fish are just incredible.  In the late spring they begin returning to the rivers of the Northwest in order to spawn.  Anglers keep their internet tuned to the salmon counts at Bonneville Dam, one of the earliest checkpoints on their way up the Columbia River.  Early counts run in the single digits - 8 salmon, ah ah ah aaaahhh.  9!  9 salmon!  And so on.  Until one day when the count begins to rise...100, followed by 500, followed by 1000, followed by 10,000, then 15K, and even higher!  The run is in, and anglers head out in incredible numbers to chase after this tasty trophy. 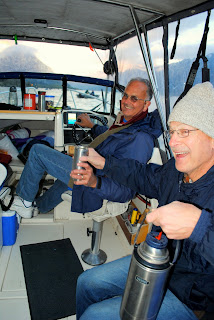 I got an invite (by way of incessant off-season whining) on a boat for a two-day trip to The Wind River, a tributary to the Columbia and a popular fishing destination.  Our captain was Rip "The Ripper" Hollingbery, whom I refer to as The Fish Whisperer.  He is a dedicated fisherman and also one of my congregants (well...unless the salmon run is on, then his boat becomes a chapel of sorts).  We headed out of Yakima at 2:00am in order to hit the boat ramp at 5:00am and beat the rush (still had a short wait, even at that hour).

We fished hard for two days, spending the night on the boat, tied up in a calm inlet.  The fishing is pretty simple, really - boats of all shapes and sizes troll lures around a strictly defined area at the mouth of the Wind.  Lures at first seem to be of two basic kinds: spinners and plugs.  But the amount of variation expressed within that basic binary is truly mind boggling.  Last year, large diving plugs were the ticket, specifically orange ones with black tiger stripes.  This year, plugs were useless (on our boat), but a spinner set-up with a bright red prawn at the hook seemed to do the trick.  Bait is trolled just off the bottom, where the fish travel in groups up-river. 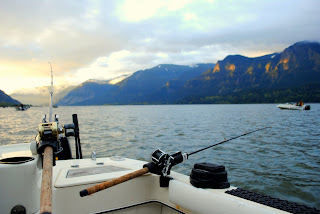 These fish are fresh from the ocean, where they grow up big and strong.  When they hit the lure, there is no doubt about what's happening - the rod tip slams down and the fight is on!  The previous weekend, Rip had boated a 28lb beauty, so our hopes were high.  We didn't see any that big, but did manage to limit the boat (2/per angler) the first day, netting six fish all around the 11-13lb range.  The second day saw four more in the boat, two smaller, two a bit larger than the day before.  Ten fish to the boat in two days is a great rate-of-catch....the Fish Whisperer never disappoints! 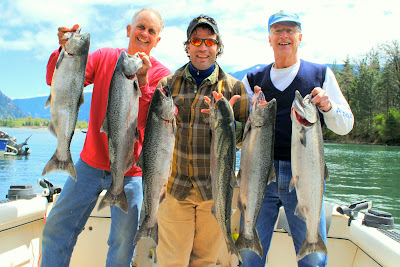 The freezer is now full of fresh salmon, and I mean stacked full.  The plan is to get a bunch of this in the smoker for some holiday treats this year.  The Yakima River opens for salmon fishing on Friday of this week, so there is the outside chance to catch one of these beauties right here in town!  I love this place!
Posted by Unknown at 6:58 PM