Good with the Ladies 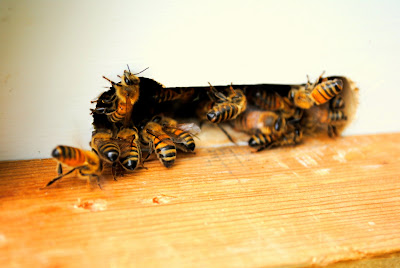 Finally got the phonecall we've been waiting all spring for - Bill Bennett, beekeeper extraordinaire and a congregant at WestPres, got ahold of me last night just as I got home from work.  A swarm of bees had settled in the backyard of a house just minutes away.  It was time to go pick up the ladies and hive them in the Top Bar Hive that I built over the winter. 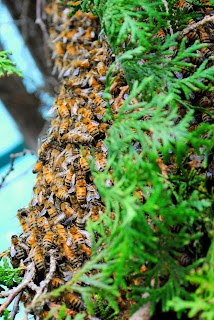 In the spring, bees get busy growing.  That means that they grow as a colony, and this sometimes leads to overcrowding in their hive.  When the conditions are right, they will produce a second queen who will lead half of the hive away in search of a new home.  What that means around here is that it is pretty common for an unsuspecting suburbanite to arrive home and find a ball of bees clustered on their house, car, fence, landscaping, dog, whatever.  The bees are very docile in this state, they are loaded up with food and clustered around the new queen to protect her, but it is still an alarming sight for a lot of folks.  For me, it meant a chance to capture a colony for the new hive.

The process is pretty simple.  The bees must get transferred into the hive, and then allowed to settle in until nightfall, when the hive can be moved to its final location.  Bill brought his bee gear, I brought the hive, and we got to work.  The swarm had settled in some arborvitae in the backyard of a suburban home.  The first task was to cut away any of the shrub that would be in the way.  The bees tolerated our presence very well.  I was able to get close for pictures without a bee suit on, and feel that I probably could have even done the whole job without being all covered up - they just weren't interested in a fight.

After trimming away some of the surrounding branches, I clipped the three branches that the bees had clustered on, holding on to them as I did so the swarm wouldn't fall to the ground.  The whole group came off neat as I could hope, Bill called it the easiest retrieval he'd ever experienced.  The swarm was then shaken off the branches down into the hive (really one big shake and the whole group dropped in).  The top bars were replaced, being careful not to squish any of the new bees (who were a touch more agitated at this point, understandably).  The hive had been pre-loaded with a frame of honey for them to eat on, and one frame of brood cell for them to start laying in.  The rest were just empty top-bars ready to be drawn and filled (more on all of these terms and processes later). 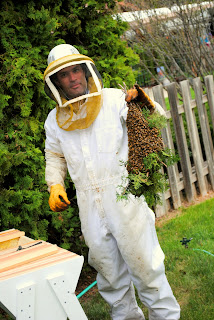 Bill and I returned at dusk, and the bees were all quietly settled into the hive.  I put the lid on, secured it with some bungee cords, we blocked the exit hole with duct tape, then we loaded it up into the mini-van.  Yes, a bee-hive in the minivan.  I had taken out the middle section of seats and we just loaded it into the car and I headed up to the bees home location.

It was a little disconcerting, I will admit, to be in the car with them.  After closing the doors, I became away of a low-level buzzing, the colony humming away in the hive just behind me.  I don't know that I have ever been so self-conscious about the level of craftsmanship I've put into a project than I was right then.  My mind was reviewing all the construction steps, making sure that I hadn't left a gap, attached something a little less securely than I wanted to, or worked out a poor design.  We made the trip just fine, and Bill and I carried the bees to their new home, a beautiful sage-covered lot overlooking the whole of the Yakima valley.  I will go check on them in a few days to make sure they are settled in.