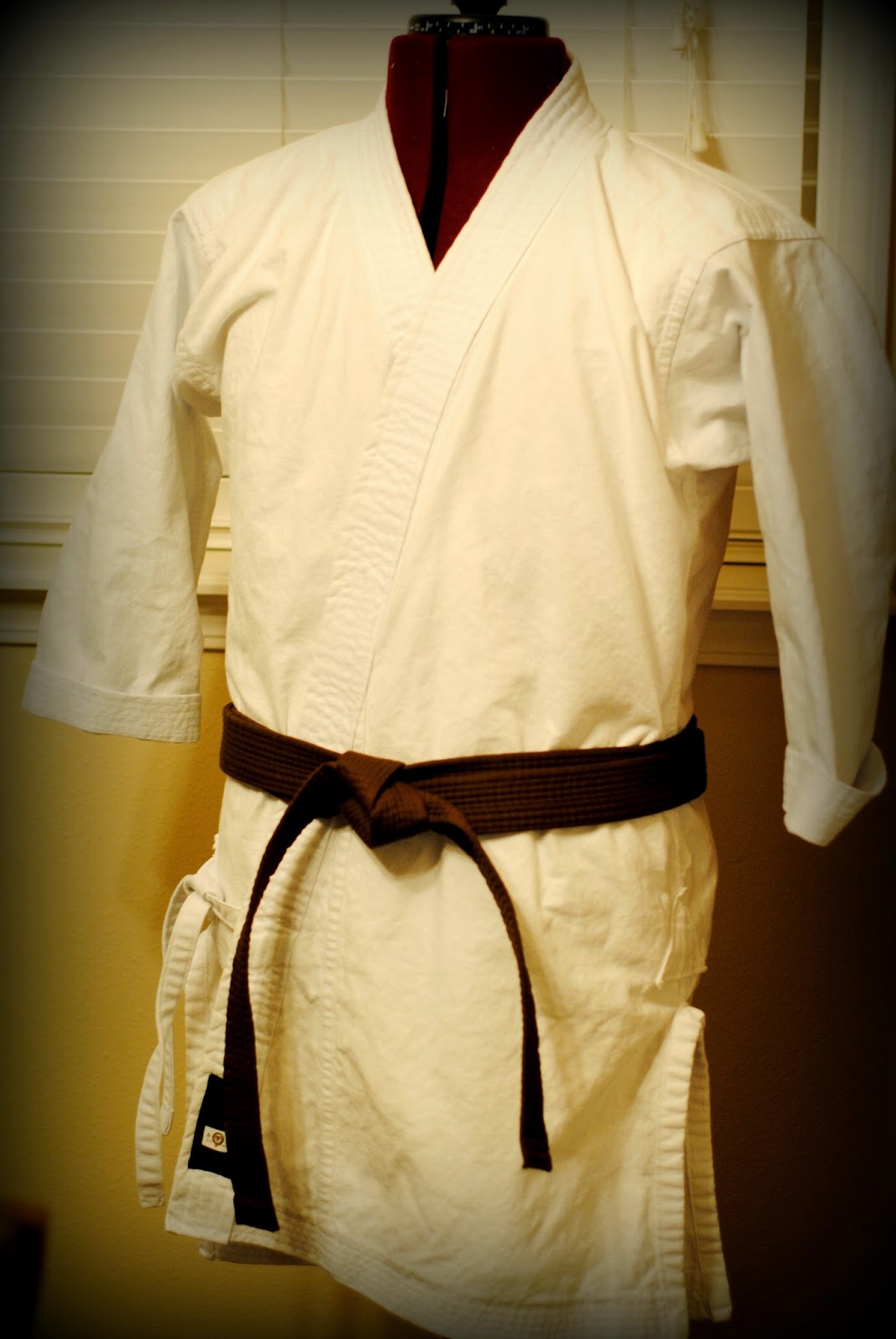 I've been working on a bunch of sewing projects over the past month.  Some were for the holidays, including some fleece pj bottoms for the kiddos, stuff like that.  I've been slowly working through tailored shirt patterns, learning my way around that stuff.  Got a couple of cool pattern books from Japan for Christmas, and those things have me all excited to try out shirts and jackets.  So why, you might be tempted to ask, why would I, in the middle of all of that, suddenly take up an entirely different project?  Well....in this case, I will have to plead self-defense.

For a little over two years now I've been taking karate at a local gym.  It started out as an activity for one of the kids, and twice a week I would drive her down there and sit on the parent-bench (you know the one), with all the other parents, waiting for the 1-hour class to finish.  The class was fun, my daughter was enjoying herself, which was nice.  The bench, however...well, it might not have been the Group-W bench, but it filled me with a kind of dread nonetheless.  Parents slouched on the bench, staring into their smart phones, in various states of could-be-better health.  I noticed that there was a beginner's class for adults happening at the same time as my daughter's class - it took me all of two weeks to put two-and-two together and I enrolled for classes.

Since then I've been training away, several hours a week, for more than two years.  You might know that karate, and other martial arts, uses a special outfit for training called a gi (pronounced "gee", like geek....shut it).  When I started out I got the starter uniform, a lightweight and ill-fitting piece of work, its only positive attribute being...... actually, I don't remember how this sentence is supposed to end.  Upgrading to a heavier-weight gi is a bit of a gamble, the sizing and such is always a mess since they are made out of cotton canvas, which can shrink and move quite a bit.  On top of that, they need to be sturdy (for all of that grappling and throwing around stuff) and roomy (lots of athletic movements).

I got a heavy-weight gi about a year ago, and I like it fine.  The pants are great, I really like them, but the jacket is less than perfect, especially in it's length.  Gi jackets are cut in a bunch of ways, depending on use and tradition of origin, but I have come to want a longer "apron" on mine, meaning a long jacket that hangs down to mid-thigh.  So, I took out my heavy-weight jacket and started creating a pattern from it, then altered that pattern to create something more to my liking, and a bit more fitted.

I finished the project today and will wear it to practice tomorrow night.  The gi ended up being great practice for several techniques, mostly due to the heavy-weight, sturdy construction that is required for a piece of clothing that will undergo so much use-stress.  Flat-felled seams are used throughout, a yoke piece is integrated into the shoulder area in an interesting way, several ties and gussets are incorporated, and all hems are super-reinforced.  Lots of top-stitching to do, often through several layers of canvas.  A denim needle (or two...broke one near the end) is a must, as well as a healthy dose of patience, especially when approaching seams where layers are stacked up. 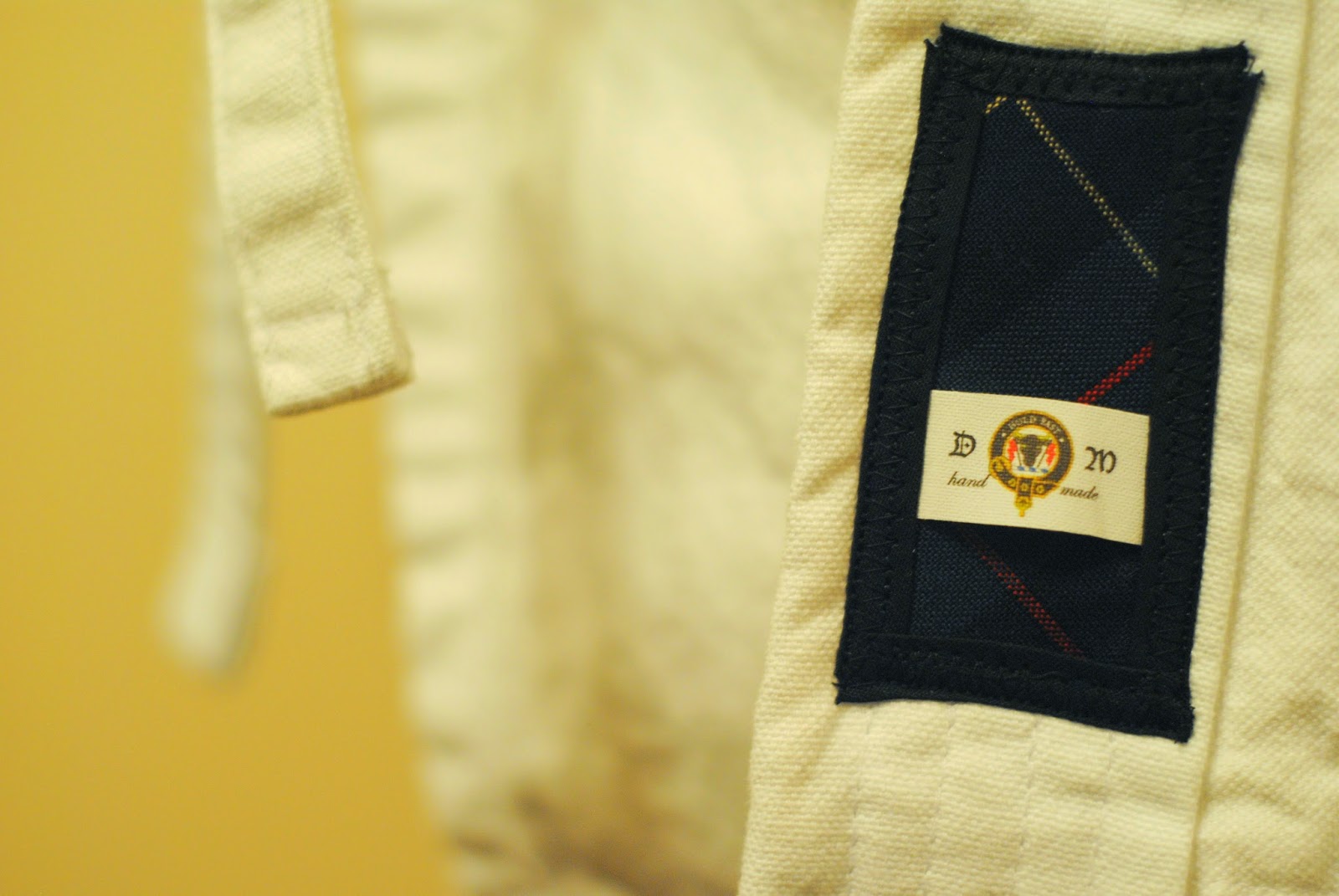 The jacket will get its real test in the coming weeks, as I work out in it and see how it wears (and tears).  But I am pleased with the way the thing turned out so far...it was a big project, but came together fairly quickly and is something I can put to use right away.  I marked it with an improvised tag, working in some tartan colors along the way.  Highland colors on a karate gi!  Fusion!