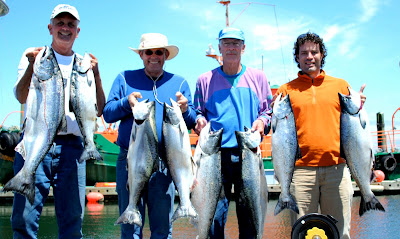 Several weeks ago I got an invitation for a late June trip to go salmon fishing on the Pacific Ocean near Westport, WA.  The salmon season is heavily regulated here in the Northwest, and at times the window of opportunity to chase these beautiful Kings is slim.  This trip was going to be two days of fishing, and would require some ridiculous travel efforts.  But the chance to fill the freezer was too tempting and so I headed out of Yakima at 11:30pm on Sunday evening, June 19th and headed west for about 4.5 hours, aiming for Westport and a boat scheduled to leave the dock at 4:30am. 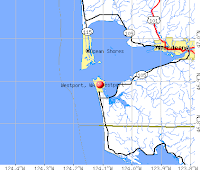 Westport is located at the south end of Gray's Harbor, WA, looking out onto the Pacific Ocean.  Ocean fishing has a whole different feel than fishing the Columbia River and it's tributaries.  The boat was the same one I fished on a month ago at the Wind.  It felt large there....but when I found it moored at the dock in the boat basin at Westport, it seemed like a child's toy as it nestled there between large commercial trawlers and coast-guard cutters.  Clearly we were in a different class of water.  Crossing the bar at the entrance to the harbor can be notoriously bad, as outgoing tidal currents meet incoming ocean swell.  I popped a couple of dramamine and prepared myself for the worst.  The guys I had joined there had fished the day before, enduring conditions that they were still talking about, a little wide-eyed.  But that morning and the rest of the two days we enjoyed fantastic weather and smooth seas.

One of the real pleasures of ocean fishing is seeing your prey, in this case Chinook Salmon, in the context of the rest of the ecosystem.  The sea is alive with every level of the food chain, and it was fascinating to see the chinook as part of this larger system.  We cruised looking for circling birds, which were feeding on large schools of anchovies balled up into "bait balls", sometimes just under the surface.  The anchovies were sometimes schooled up large enough to cover a large parking lot, at times stretching a hundred yards.  The depth finder would show them spread out between 20-30 feet depth, at other times they made the surface ripple like it was raining as they flashed and darted at food made just their size.

The birds preyed on the anchovies from above, but other, larger predators worked on them from below.  At times you could see the anchovies leaping up out of the water in a kind of a wave that would travel from one end of the ball to the other - something was coming at them from underneath.  Often, it would be hungry chinook.  But there were all kinds of predators out: seals, sea lions, dolphins, and even whales.  And, of course, there were the fleet of boats out pursuing the chinook who were pursuing the anchovies.  A regular circle of life.

On the Wind we pulled candy-red prawns on spinners, but here it was lures only.  This meant no bait to worry about, which was nice.  The focus becomes on color and shape, and the newest trend is in ultra-violet colors that are part of the visual spectrum of the fish.  We trolled at fairly high speed, and varied the depth from 30-80ft, picking up fish all through the water column.  The catch was more varied than on the Columbia, we saw more wild fish and more coho salmon in the mix, both of which had to be immediately released.

We limited the boat, 2 keepers apiece, the first day by about 12:30pm and motored back to the boat basin to process the fish.  Enforcement was pretty sharp - a uniformed Fish and Game officer boarded every boat that returned from fishing, examining each fish to make sure it was legal, searching the holds of the boat for any hidden catch, and checking each on of our catch cards, to be sure they were filled out.  We had a pretty impressive fish box, lots of lookers coming by to see what we had brought in.  This included a 1500lb sea lion that had a reputation for being a bit too forward when he thought a snack could be found. 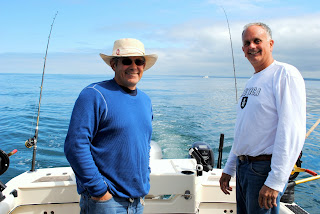 The next day we had even more beautiful weather, and the anchovies were more plentiful than the day before.  The birds seemed to be sated, but we saw more dolphins and a pod of orca was spotted nearby as well.  We even watched a gray whale plow through a large section of fish at one point, about 100 yards off to one side of the boat.  The fishing was slower, and we had to cut loose a bunch of coho in the morning, but we managed to get 4 in the boat before calling it quits around 12:30.  This was a great experience, though the guys kept reminding me that the conditions we saw over the two days were not common.  I was glad for the chance to experience it and am especially glad for the freezer full of fresh salmon! 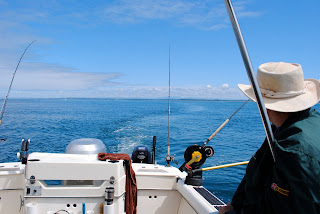