A Home For Bees 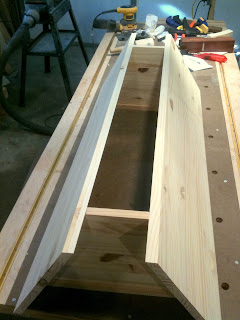 This has been a fun project - Kenya Top Bar Hive, or KTBH in beekeeping shorthand.  The top-bar hive is a kind of old-school, developing world kind of way to keep bees.  Proponents favor the natural management that the top bar hives call for and for a hobby/home beekeeper the cost to get started with one is pretty minimal.  I built a hive and am now waiting to capture a swarm to populate said hive - that promises to be an adventure.

Here's how the hive works:  A long, coffin-like body houses the top bars, named because they rest, nestled together, along the top of the hive.  The bees build their comb structures hanging off of the top-bars.  It is sort of like a big, horizontal filing cabinet, with the bees laying comb like hanging files, filled with brood cells and honey storage.  Unlike the Langstroth hives (the boxes you so often see stacked in rural parts of the country), the beekeeper need only furnish the box, since the bees build their own comb - no frames or foundation to build/buy. 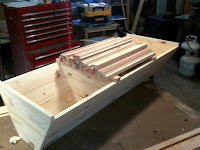 This hive was put together with some plans found on the internet after a couple weeks of searching/research.  I modified them slightly and put it together with an eye towards a fairly clean looking final product.  Since this is the only hive I plan on running this year, it seemed worth a little extra effort.

The case came together quickly, in the above picture the sides have been milled and two follower boards (in the file cabinet metaphor, these are the equivalent of section dividers, capable of closing off sections or dividing the case) are being used to prop it in place in order to fit the ends. 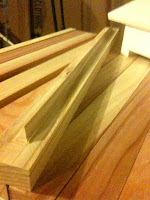 After the case was completed, it was time to mill up the top bars.  These were made from 2x2 redwood that I milled down to size and then ran a series of cuts on the table saw to get the profile I was after.  There are several designs for top bars, some with a saw kerf down the middle, some that seat a spline in a kerf, and others, like these, that have a milled guide on the bar itself.

That profile then has to be trimmed off the ends of the top bar so that it will rest flat on the edges of the  case.  The top bars sit directly adjacent one another so there are no gaps between them - this keeps the bees in the box building comb and allows the beekeeper to work with a few bars at a time, rather than cracking open the entire case and making the whole hive....well....upset. 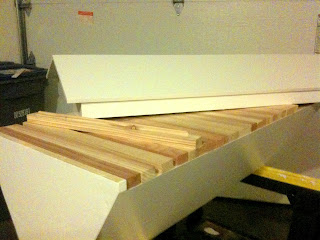 Lids come in a variety of designs, from very simple (flat, plywood placed on top and held down with a rock) to something a bit more complicated.  I, of course, opted for the latter, though not simply because I'm a glutton for punishment.  The winds here in the Yakima Valley can be pretty brutal, and we do celebrate all four seasons here, so I wanted something that would shed snow, hail, and wouldn't allow rain to pool up.  All that demanded a design that was a bit more sturdy.  Well....it might not have "demanded" it, but it made it easier to justify.  So I put together a gabled roof that will end up being held down to the case with straps for good measure (the winds can be pretty incredible). 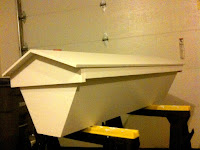 Some legs were worked up and when attached they form a resting ledge for the lid.  Metal screen was stapled to the bottom and two 3/4" holes were drilled in one end.  The outside was painted with a few coats of white, exterior latex (the outside only, the bees take care of the inside, covering it in propolis) which will have several weeks to dry and be fume-free by the time we move some bees in.  A local beekeeper is helping me out on the capturing-bees end of things, for which I am exceedingly grateful.

So now, we wait.  I think we can anticipate having a swarm moved in by early May and then the real fun starts.  I might keep a running tally of stings, just for fun. 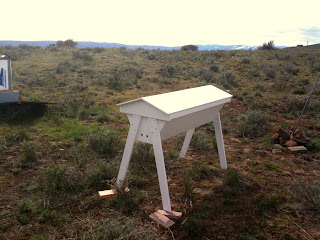